The two video pieces and one neon work each point to the fragility of life. Addressing the fear of losing the sense of space and time, of feeling forlorn in a rapidly changing environment without the capability of intervening. Worrying about things coming to an end or endlessly continuing. Perpetually trapped in a repetitive loop. Floating over an abyss, yet sustained by the assurance of supporting friends.

Created before the Covid 19 pandemic, the works raise fundamental questions of existence and being-in-the-world. Topics that belong in a window display, to be reflected and apprehended with a new sensitivity despite their frightening actuality.

In her radical performances consciously exposes herself to fears and borderline experiences. The tragic loss of a friend became the subject of one of her performative actions in 2015 during which she floated in ice-cold water, wearing her friends’ blouse, up until the “very last moment”. SchauFenster presents her video work The World Looks so Much Better from Above from the same year. It, too, refers back to the death of a friend who fell from a mountain. In the video Honrata Martin is standing on the roof of a high-rise building, leaning over the edge while being held back only by her partner, who is grasping her pony tail.

„Or she dreams that she’s standing on the roof. Or maybe she’s actually standing there? Znojek is holding her ponytail. And again, she’s having this recurring fantasy that her hair slips out of his hand and that’s it. Just like that.“ Anna Mituś 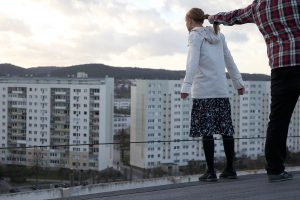 We are delighted to present our new exhibition series SchauFenster which presents artworks in the window front of KVOST. The exhibition will be on view daily from 2 pm to 10 pm.

Dance, choreography and performance are at the centre of Nina Kurtela’s artistic work Transformance. Created in 2010, the time-lapse video documents a performance that took place over the span of five months at Uferstudios in Berlin-Wedding, formerly a workshop for Berlin’s public transportation network. During this time the space was reconstructed into studios for contemporary dance. The artist remains almost motionless in the spot where the future stage is being built while surrounded by the day-to-day business of a construction site. Her dance is reduced to immobility. The dancer remains still while the world around her continues to turn. 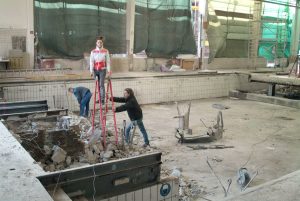 The two videos are supplemented by the neon work The End of the Circle, created in 2019 by Vikenti Komitski who lives in Berlin. „To every circle there is an end’“ this ambiguous sentence is formed by neon letters arranged in a circle. Only the future will show which cycle will come to an end, which one will start over again, maybe taking a different course this time.

Honorata Martin
*1984 in Gdansk, lives in Gdansk, Poland.
She studied painting at the Academy of Fine Arts in Gdansk. 2015 she received the prize of the city of Gdansk for young artists as well as the main prize of the Splendor Gedensis. In 2017 she received the Views-Deutsche Bank Award for polish art.
Selected works:
“Polish Hospitality” – Museum of Contemporary Art, Wroclaw
“Late Polishness, Forms of National Identity after 1989” – Ujazdowski Castle, Warschau ‘Bones of all Men’ – Centre of Contemporary Art Znaki Czasu, Torun

Nina Kurtela
*1981 in Zagreb, lives in Zagreb, Croatia.
She studies dance, context and choreography at HZT and the University of Arts in Berlin and fine arts at the Academy of Fine Arts in Zagreb.
Her works have been presented at exhibitions and dance festivals:
“Productive work – What is it supposed to be?” – Freiraum Museumsquartier, Vienna
“Japanese Media Art Festival Award” – Museum of Contemporary Art, Tokyo
“Group Show, The Matinée” – La BF15, La Biennale de la Danse, Lyon
“Buen Vivir” – Museum of Contemporary Art, Zagreb
“Tanz Im August” – Berlin